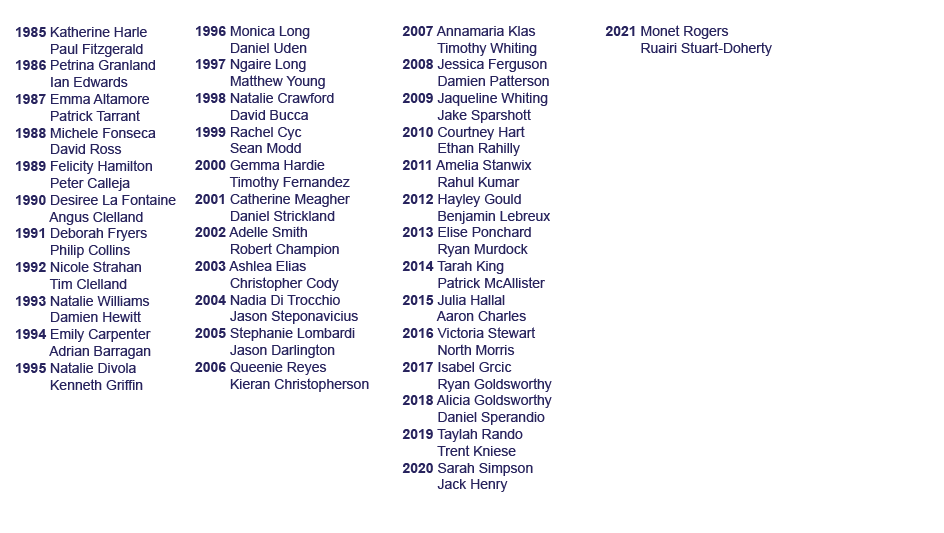 The student who receives the highest aggregate score in VCE is the recipient of the Principal's Award.

This award is in recognition of academic excellence in the final year of secondary school. The Principal's award was awarded to students during the years of 1983 - 2015.

The student who receives the highest ENTER/ ATAR in their final year of study. 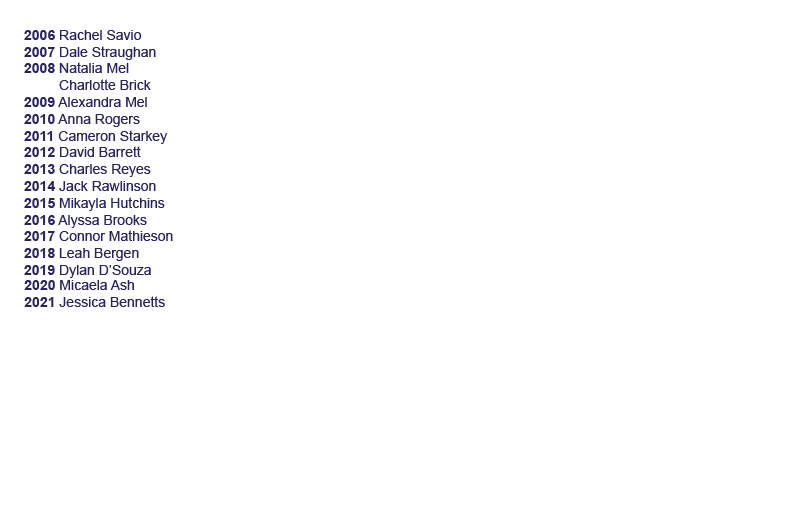 This award gives recognition to the student or group of students who have been outstanding in their contribution to the college community and/or the wider community.

It is dedicated to the Sisters, Faithful Companions of Jesus. 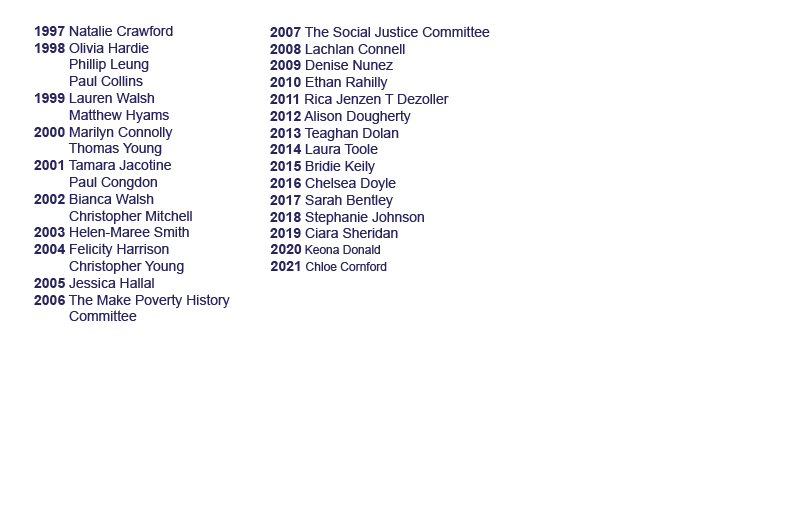 This award is in recognition of Ian Smyth's service to the college in the late seventies and early eighties, as a member of the Sports Committee and as president. The aim of this committee was to raise funds for the further development of the Physical Education and Sports Programs. Illness prevented Ian from continuing in his involvement and he passed away in 1982. This Sportsperson's Award is given each year to the outstanding sportsman and sportswoman in memory of Ian Smyth's contribution to the sporting life of the college. 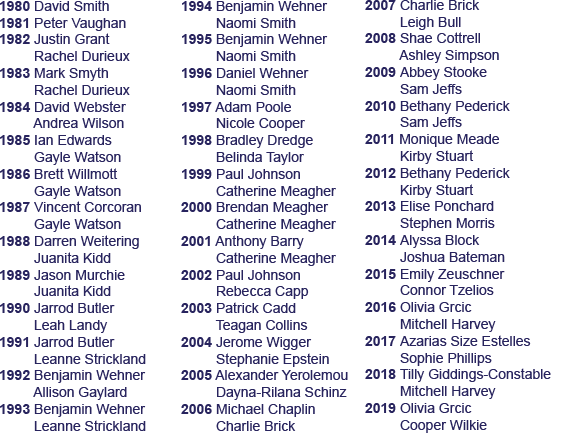 This award is in recognition of Jean Carter's contribution to music in the Frankston area. The recipient has shown outstanding commitment to the musical life of the college. 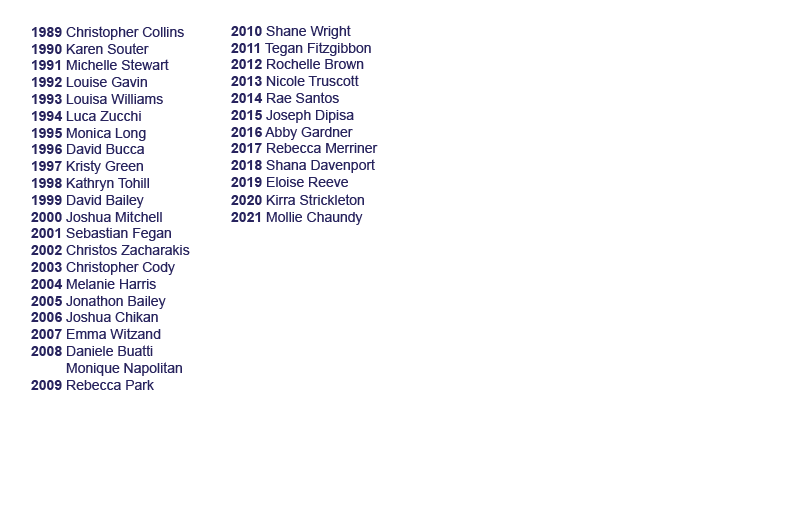 Marcelle Casamento completed HSC in 1988 and was tragically killed in a car accident some twelve months later. This award recognises those very qualities which made her an inspiration for so many others. Marcelle was sincere, kind, friendly and caring; her spirituality enlivened all those with whom she came in contact. The Marcelle Casamento Award is presented to a student whose faith and values have enabled him/her to contribute to the spiritual life of the college through fidelity to Jesus Christ.

This award was made possible by the establishment of an Endowment Fund by the Marianist Province of Cincinnati, one of the aims of which was to recognise outstanding leadership, dedicated service and academic and professional excellence in both staff and students. Each year the college recognises a student or group of students who have exemplified the qualities of leadership in their role in the college community. 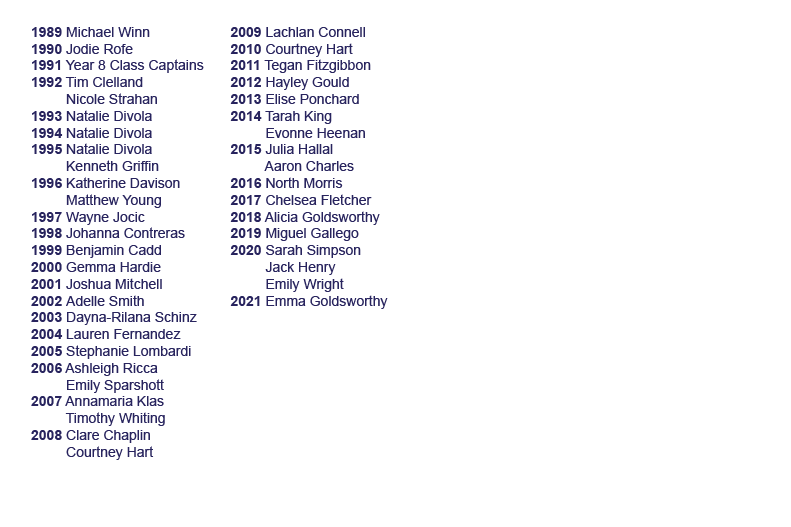 Simon Ball is also a past student of the college who was tragically killed whilst riding his bicycle in 1984. Simon's dedication and sense of purpose, despite some obstacles, were admirable. He had a broad smile which reflected his positive approach to life. The college remembers Simon by conferring this award on a student who has worked to the fullest in order to achieve his or her potential, whatever that potential may be.

This award recognises students who portray constructive and production behaviours in relation to their teachers and fellow students; a positive engagement and an integral contribution and involvement in school community activities; and perseverance to stick at their goals and overcome obstacles and setbacks. The personal qualities recognised through the award include a student who is Positive, Passionate & Persistent. 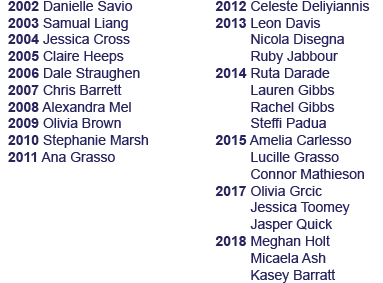 The ADF Awards Program acknowledges the achievements of young people who have demonstrated outstanding qualities of leadership and teamwork either within the school or in the wide community. 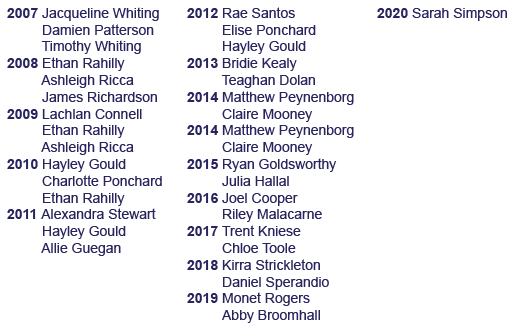 The ADF Future Innovators Award recognises students who excel in STEM (Science, Technology, Engineering and Mathematics) and encourages the next generation of innovators, critical thinkers and problem solvers.

The John Paul College community promotes the safety, wellbeing and inclusion of all children.